On Off Charge Controller

Abdullah Baig
495
0
0
0
It charges a 12 V battery with hysteresis method. It is most suitable for use with solar panels. However, 14-15 V power supply can also be used. Battery cut-off voltage can be adjusted with a variable resistor or set at 13.3 V with fixed resistors.
Open in Editor

This charge controller is also suitable for charging a battery with solar panels if the maximum voltage and current conditions are met.

An LED indicates the state of the charger, so when the battery is near its full charge, the LED starts pulsing instead of beaing constatnly on. The off-time between the pulses increases as the battery fills up, thus visibly indicating the state of charge of the battery. When the battery is completely charged and the threshold voltage is corerctly set according to the abttery type, the LED gives a 1.1 sec pulse after every 10-15 sec and the battery gets an equivalent of float charge.

If a load is connected to the battery, the charge LED may light up constantly instead of pulsing even when the battery is near its full charge.

This charger is intended to be used with small to medium sized 12 V flooded lead acid batteries from a ~ 14 V charger or a solar panel.

It is very important that the power supply must have a current limit. This current limit defines the battery charge current in the bulk charging phase. The general rule of thumb is that the current limit must be 1/10 of the battery capacity. For example, a 2 A power supply would be suitable with a 20 Ah battery. Highers currents up to 1/5 C can be used with flooded batteries on the condition that their temperature and water level must be continuously monitored.

Solar panels can inherently supply only a limited current, so they are a much easier choice as long as their maximum current is in accordance with the battery capacity as described above.

If a solar panel is used as the charger, then small and meduim sized panels usually have maximum voltage up to 22 V, which is suitable for this charge controller. However, if a power supply is being used, then its nominal voltage must be 14-15 V. If the nominal voltage of the power supply is less than this range, it may not charge the battery completely and if it is higher, the supply may be overly stressed by the reduced voltage at its output (13-14 V) when the battery is being charged.

The swithcing element in this circuit is a TIP147 operating at a maximum of 1 Hz. It is not expected to heat up greatly if the charging current is below 5 A. However, its heatsink may be hot to touch after continuous operation. Care must be taken to appropriately judge the heatsink's temperature before handling it. 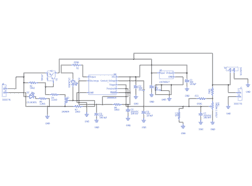